I am not one to promote myself.  It’s part of the business, but I still feel quite weird about it.  This time I have to share as it is pretty exciting.  I haven’t told you, but I grew up performing.  I always wanted to be a singer growing up
and acting was a passion of mine.
I don’t do it for the recognition or fame, I do it for the fun… for the relationships, and quite honestly, there is nothing like being on set.  15 hour days seems like minutes not hours on set.  I can’t explain it, but it is a place where I always feel at home.  I know as an actor I have a lot to learn and more experience to build, but when there is exciting news, I just have to share.
Yesterday I attended a screening of a film that was filmed a year and a half ago.  It was an amazing filming experience.  I was not originally cast – I didn’t even know about the film.  One of my dear friends from acting class contacted me to share the opportunity.  He mentioned the talented group of filmmakers and encouraged me to give it a shot.  I am so thankful I sent in an audition tape!
Unfortunately, so much happened with shooting this film, which is why my role became available.  The writer/director lost her mother during the beginning stages of filming.  Needless to say, all filming was postponed.  The actor I replaced was in Europe the month filming resumed and could not cancel her trip.
Luckily for me, I was given the chance!
Last night I was able to see a screening of the film at the
Peachtree Village International Film Festival.
The film is up for “Best Feature Film”!
That is huge!
I am thrilled for Simboya Entertainment, crew and cast.
Simboya Entertainment is a class act and this nomination is well deserved!
Okay, okay… what movie?
This is going to hit home with all of us bloggers… (The blog part at least). 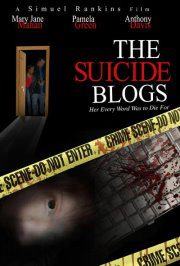 Yes, you read that right… The Suicide Blogs!  This movie is so well written you are at the edge of your seat the entire time, wondering what will happen next.  Most importantly, this movie sends a message… if you or anyone you know is having suicidal thoughts please reach out for help.
Below is the trailer…
The Red Carpet Event and Awards Ceremony is this evening.  I couldn’t attend, but I am on pins and needles waiting…  My friend is facebooking all of the details.
I will let you know how it turns out.
Thanks to Simboya Entertainment for all of your hard work!
The movie turned out amazing!
Enjoy!
Angie
By
Angie
/
2 Comments
Previous Post Next Post

This site uses Akismet to reduce spam. Learn how your comment data is processed.